How To Remove Links From or Resize Your Linked Bracelet Watch

I have a tiny wrist, so I was aware before ordering the Jules Watch from Send the Trend that it would need to be brought to a jeweler for resizing. 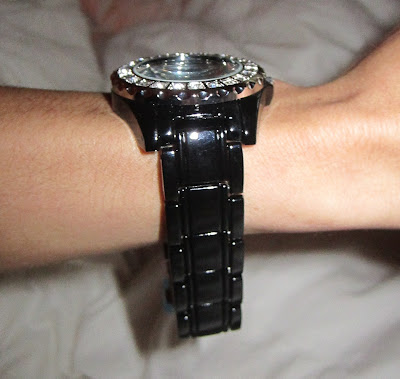 Little did I know, watch links are easily removable by anyone! Kaitlin from STT sent me instructions that called for a small hole punch and a pair of pliers. After reading through the directions, I quickly realized that this could be done a whole lot easier. With just a few modifications, I decided to give it a go.

As you probably know - shoes, bags, and accessories have names (people names that is). About a month ago, a bunch of the girls and I were having a conversation about  shoes and other items that share our names. I mentioned that I've yet to see a shoe share any version of my name. Then something happened that made it seem as if these retailers were secretly members of our private groups and saw my post...

First came the Jules necklace from Belladazzle. This doesn't actually count because it was custom made for me and therefore, named after me. Thanks again Esther from Belladazzle! :)

Over at Shoedazzle, I came across a flat named Jules. Unfortunately, it wasn't very cute. Even if it was, I probably wouldn't have ordered anyway. Since I reopened my SD account a few months ago, I've only ordered two pairs of Converse and a jewelry box. One of the Converse were defective and the jewelry box was broken - I see that some things never change!

When September 1st rolled around and I logged on to Send the Trend, right there in my gallery was a beautiful watch named Jules. I was beyond excited. I immediately sent Joyce a text to let her know what I "found". We both ended up ordering it! 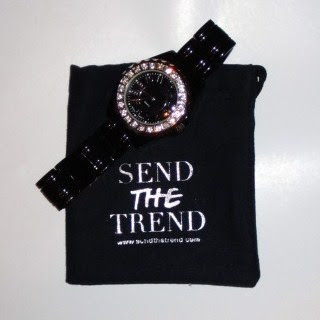 I love handmade jewelry - it's so unique! So I was excited when my friend Esther launched her handmade/fashion jewelry business. Esther has been designing jewelry for the past seven years. Her love for jewelry started at Girl Scouts when she was just 10 years old, where she made her first pair of earrings. She knew right then and there that designing jewelry was something she wanted to do. This led her to making jewelry and then the launch of Belladazzle.

Belladazzle offers a variety jewelry styles including silver, beaded, wire wrap, and wire coil. There are simple pieces such as long chain necklaces with a single stone or more detailed pieces that have swarovski crystals, pearls, and charms incorporated into them. Check out the handmade jewelry album on BD's Facebook page to see some of the beautiful (and very affordable) necklaces, bracelets, and earrings she has available.

The great thing about Belladazzle is the fact that you can have nearly anything designed for you. If you know exactly what you are looking for, she can create it! If you don't have specifics in mind and just have some basic ideas, you can let her know and she will design something based off of your preferences. I told Esther that I wanted a necklace - something that I could dress up or down, that had a somewhat long chain, wasn't a huge statement piece, that was simple yet eye catching. What did she come up with?...
I couldn't have asked for a more perfect piece of jewelry. I love how it is so simple yet the swarovski crystal heart and beads make it so elegant and stunning - just like I had requested. This necklace can be worn with a nice dress or even very casual with a basic v-neck t-shirt. I have already worn it several times since receiving it so I see that the Jules Necklace may quickly become an everyday accessory! 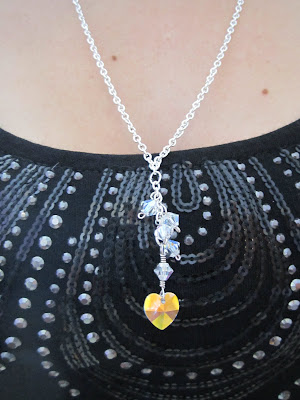 Do you love it as much as I do? I really think it is just perfect for me!
It isn't just jewelry at Belladazzle, but handbags as well. Esther has a knack for finding designer inspired handbags that she can offer to us at affordable prices. Many of the item listings actually include a picture of a celebrity with the designer bag, so you can see it alongside the affordable version! Looking for a cheaper version of a particular bag? Let her know and she will try to find one for you! I will be purchasing a handbag from her this week and will report back once I receive it.

My good friend Joyce recently made numerous purchases from Send the Trend. I love all of the items she chose. I've been a member for quite some time, but never made any purchases until last night. I ordered the Madeline Gray Ombre Scarf and the Electra Leather Bracelet. Both of these pieces will work well with my fall wardrobe. I will be sure to take photos and share them with you as soon as I receive the items. Read on to find out how you can score a buy one get one free deal from Send the Trend!

Both Joyce and I have Style Pages on Send the Trend. These pages contain our favorite items. It is like having our own personal accessories store that each of you can shop from!

You can help us out by nominating each of our pages. Please click the thumbnails below to be taken to our separate pages. Once you are on the page, you will see a "nominate me" button next to our style descriptions. By clicking that button you will cast your vote to keep us on the top stylist list (you can nominate more than one person).

Haven't tried Send the Trend? Groupon is currently offering a Send the Trend deal (available to new members only) where you pay Groupon $29 and you will receive a $60 promo code for Send the Trend. This translates to purchasing two items for the price of one!
Send the Trend is located in NYC, which means you won't wait long for my review. I should have the items in just a few days, so be sure to check back!

Remember those JustFab Barbados sunglasses that I gave away last month? For a limited time you can purchase any three pairs from JF's sunglasses line for just $39.95! This is a really great deal for UV protection sunglasses. Get them before they are gone! Which ones are your style? I tend to favor the larger styles - Barbados, Montego Bay, and Bermuda!
Posted by Jules at 11:51 AM No comments:

You can work this seasons color block trend by adding bright accessories to your outfit. Inspired by the below pictures (as well as tons of other pics) I was determined to find a cute but affordable, bright colored watch.

$195.00 by Michael Kors at Marissa Collections
*I originally found this one at ASOS for $320.95. Very similar!
I found just what I was looking for at Target!  These Xhiliration brand watches are just $12.99!  I couldn't decide on color or style, so I purchased one of each style in three different colors.  They also come in white, green, yellow, purple and black.

Looking for something? Search this blog: